The notorious legend of the “Black Man at the Crossroads” ignites much curiosity across cultures. References to making deals with devils at dusty four-way crossroads are found as early as the fifth century in the writings of St. Jerome. In the sixth century, we see the legend of Theofilus, who sold his soul to the devil in exchange for a position as bishop. Numerous instructions for conjuring demons exist in the old grimoires. Of course, we cannot ignore the infamous deal with the devil allegedly made by renowned bluesman Robert Johnson. According to legend, Johnson went to a crossroads at midnight and summoned Satan, who appeared as a large black man. Johnson gave his guitar to him, and the “Devil” tuned it, played a few songs, and gave the guitar back to him. In exchange for Johnson’s soul, the devil gave him the skill to play the legendary blues for which he is famous.

But who is that black man at the crossroads? Some say he is Satan. Others say he is Papa Legba, the Voudou spirit everyone nowadays confuses with Baron Samedi, the Voudou Spirit of Death. Still, others say it’s neither Legba nor Baron Samedi; instead, he is an aspect of Legba called Met Kalfu. Historically, it was the habit of early missionaries to liken Legba to the Christian Devil, whose evil nature must be feared. However, Legba is neither demon nor devil, nor is he Satan himself. In fact, he is arguably the most important and beloved spirit in the New Orleans Voudou pantheon. He serves as the guardian of the Poto Mitan, the center of power and support in the sacred temples. All ceremonies begin and end with him, and there can be no communication with any of the other spirits without consulting him first. Papa Legba is the cunning, celestial trickster, master linguist, warrior, guardian of crossroads and entrances, and destiny's personal messenger. His gift for linguistics enables him to translate the requests of humans into the languages of the Spirits. In Legba’s vévé – his ritual symbol - is the crossroads. He is known by several names in New Orleans: Papa Legba, Papa Alegba, Papa Labas, and Papa Limba. During Mardi Gras season, a popular shout by revelers is “A Labas!” This is a reference to St. Peter, who has functioned for over a hundred years as the Catholic cloak for Legba in New Orleans Voudou.

If you want to learn more about New Orleans Voudou, you will want to know Papa Legba. Anyone can work with Legba - initiation is not required. Guidance, however, is highly recommended as he is a trickster spirit. In this course you will learn who Papa Legba is and who he isn't, how he is served in the context of New Orleans Voudou, how to set up an altar to him and a variety of ways of working with him. This course is for anyone who wishes to broaden their knowledge base about this most important spirit in the New Orleans Voudou pantheon. Without Legba, all efforts to communicate with the other spirits is for naught. 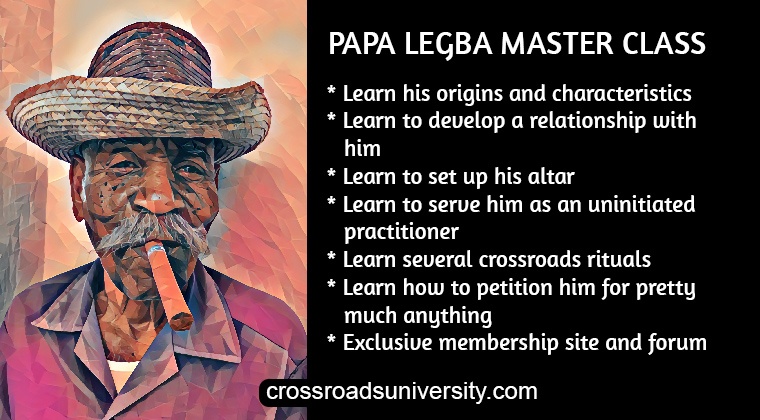